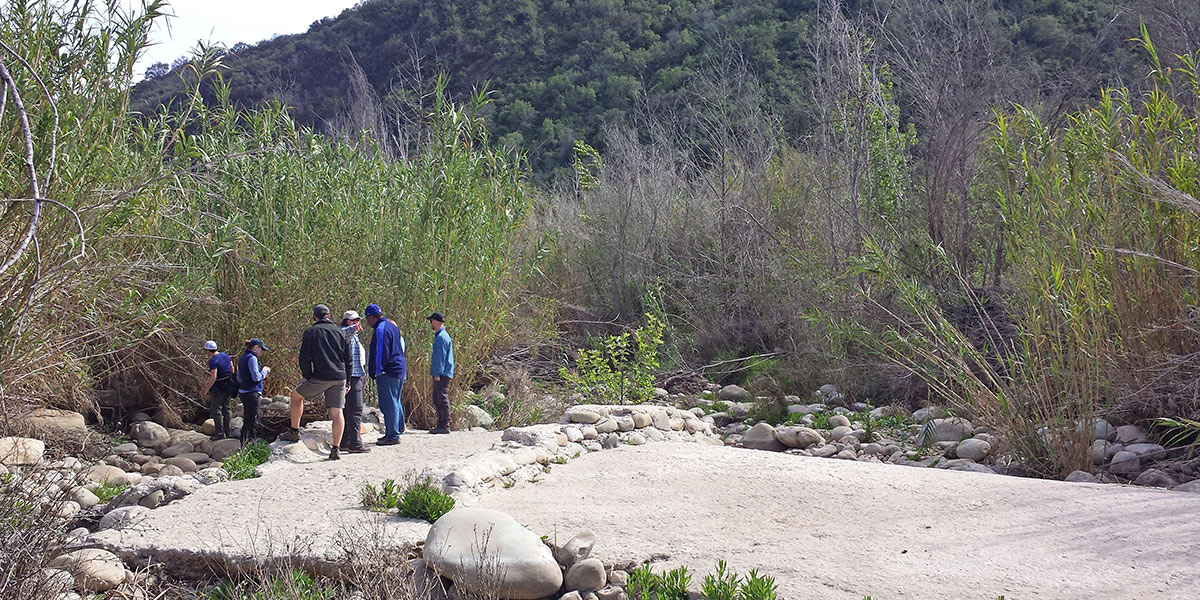 On Monday, March 28, 2016, representatives from several state agencies toured the Ventura River watershed as part of preparations to begin work on one action identified in the California Water Action Plan (WAP), which instructs the agencies to “enhance flows statewide in at least five stream systems that support critical habitat for anadromous fish.”

The Ventura River is one of the five priority stream systems selected statewide for enhanced flows, and the only one in southern California. (See the article below for an explanation as to why this is significant for sustainable groundwater management in the Upper Ventura River Basin.)

So, representatives from the State Water Resources Control Board (State Board), the Los Angeles Regional Water Quality Control Board, and California Department of Fish and Wildlife (CDFW) toured the Ventura River watershed this week. They observed the geology and the Robles Diversion Fish Passage Facility, took lots of pictures, and got more familiar with what a (mostly dry) southern California river system looks like.

Two agencies—State Board and CDFW—are charged with enhancing instream flows, and this may include developing and implementing a flow objective. These agencies are in the process of gathering background information on the five rivers and developing their work plan. Later this year, they will hold a stakeholder meeting in the watershed to discuss the project. Once a date for that meeting is known, it will be announced in the UVR-GSA e-news.

As flow criteria are developed by the CDFW Instream Flow Program, CDFW will submit flow recommendations to the State Board for consideration in planning efforts and water allocation decisions. State Board has authority over surface water rights in California.

For more information on the WAP and the flow objective, see the State Board’s website and the CDFW’s website. The CDFW’s Outreach page includes background information on instream flow studies conducted on other rivers. You can also sign up to on the California Water Action Plan/Statewide Instream Flows email list at the State Board’s email subscriptions page. Check the third box under the Water Rights category.

Why Streamflow Matters to Groundwater Management

Surface water dives underground in many places on the Ventura River and groundwater rises up and meets the surface in others: these waters are interconnected. Therefore the management of groundwater under the river cannot ignore the surface water above.

Only one of those six effects is considered a major issue for the Upper Ventura River Basin, and that effect is: Depletions of interconnected surface water that have significant and unreasonable adverse impacts on beneficial uses of the surface water. “Beneficial uses” is another technical term that includes many things, one of which is the preservation of fish and aquatic resources.

With so little surface water or groundwater to share among the various beneficial uses, it will not be an easy job for the new UVR-GSA to address this undesirable result in the Upper Ventura River Basin’s groundwater sustainability plan. The work of state agencies to study the Ventura River as part of the California Water Action Plan’s goal to increase flows will hopefully generate new data and information that will help with this important task.