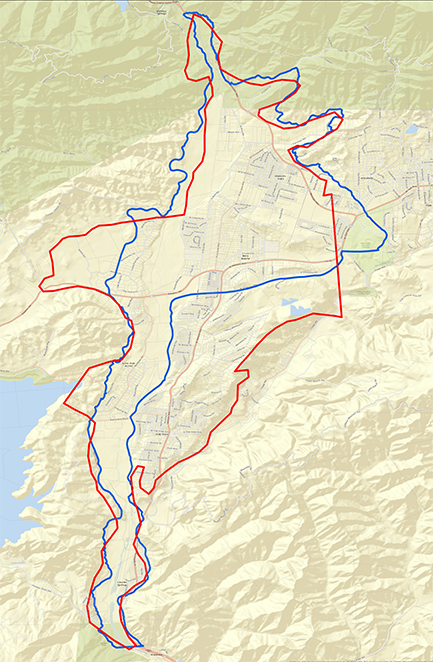 The Sustainable Groundwater Management Act (SGMA) established a process for local agencies to request that the Department of Water Resources (DWR) revise the state-designated boundaries of existing groundwater basins. Unless modified, basin boundaries are as indicated in DWR’s Bulletin 118.

In January 2016, the board of the Ventura River Water District decided to explore a basin boundary modification, acting on concerns raised at a November 2015 GSA Formation Committee meeting: that the current boundary is inaccurate, that it would need to be corrected, that the regulations offer limited opportunities to make changes (roughly every five years), and that if the boundary wasn’t accurate to begin with, stakeholders who could be affected wouldn’t know whether to become engaged in the process.

Based upon the discussion, the hydrogeologist re-mapped a new boundary. DWR staff prepared an updated proposed boundary map for the Upper Ventura River Basin in an electronic format suitable for submission to DWR. The proposed boundary better defines the actual physical boundaries of the basin, clearly showing who would be in the basin and could be affected by the groundwater sustainability plan.

The proposal to modify the basin boundary has been presented at a Formation Committee meeting, a stakeholder meeting, a Ventura River Watershed Council meeting, and as an informational item to the City of Ventura Water Commission. A final decision to go forward with the modification request was made by the Formation Committee on February 16, and the formal request to DWR for the boundary change was sent on March 30, 2016.

See the sidebar links for maps showing the proposed boundary in relation to the existing boundary, as well as a presentation provided by hydrogeologist Jordan Kear on the topic.

To learn more about DWR’s process, see their Basin Boundaries Modification website. You can also see and comment on the UVR-GSA’s request on the DWR’s Basin Modification Request System website.