The Upper Ventura River Basin (UVRB) is located in the Ojai Valley under and next to the upper part of the Ventura River. It stretches from the Camino Cielo Bridge just below the confluence of Matilija Creek and North Fork Matilija Creek, down to Foster Park below Casitas Springs.

Although it is a relatively shallow basin, it is a crucial source of water for the area. It is one of four groundwater basins that supply water to the Ventura River watershed and surrounding coastal watersheds – areas that are 100% dependent upon local water sources. No water is imported here, and groundwater is relied upon to provide about half of local supplies.

Water from the basin is used by growers; by residents and businesses in the communities of Oak View, Mira Monte, Meiners Oaks, Casitas Springs, and the City of Ventura; and by native habitats and the animals they support.

Average inflow to and outlfow from the basin have been about equal over the past 60 years, at about 10,000 acre-feet per year. This stable trend is evident in the 1949-2015 hydrograph, which shows the ups and downs of the water table over that period. The decline in recent years is due to the current multi-year drought. 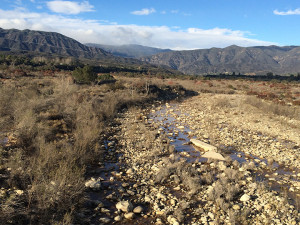 The UVRB is an “unconfined” basin, meaning there is no impermeable or confining layer of clay or rock above the basin, allowing water to seep directly into the basin from the ground surface above. The amount of surface and subsurface water in the Ventura River (which is fed by Matilija Creek and North Fork Matilija Creek) therefore plays a big role in recharge of the basin. The other major surface drainage that contributes water to the basin is San Antonio Creek (which is fed in part by drainage from the Ojai Valley Groundwater Basin).

Like the other groundwater basins in the watershed, the UVRB is located in an “alluvial fill” valley. Alluvium is unconsolidated sediment (silt, sand, gravel, cobbles, boulders) that has been eroded from surrounded mountains and transported and deposited by water. This alluvium underlies the watershed’s streams and river and comprises its groundwater basins.

Groundwater basins that are alluvial and largely unconfined refill rapidly fol­lowing periods of high rainfall and decline slowly under natural conditions. For example, the Ventura River Water District (which has wells near the Highway 150 Bridge), has found that the basin in the area of its wells tends to hold about an 18-month supply of water. Conversely, the basin can go from empty to full with just three months of average winter rain. This rapid filling can be seen on the 1949-2015 hydrograph.

Groundwater flows through the alluvium from north to south, following the surface drainage and the relatively consistent gradient of the basin. 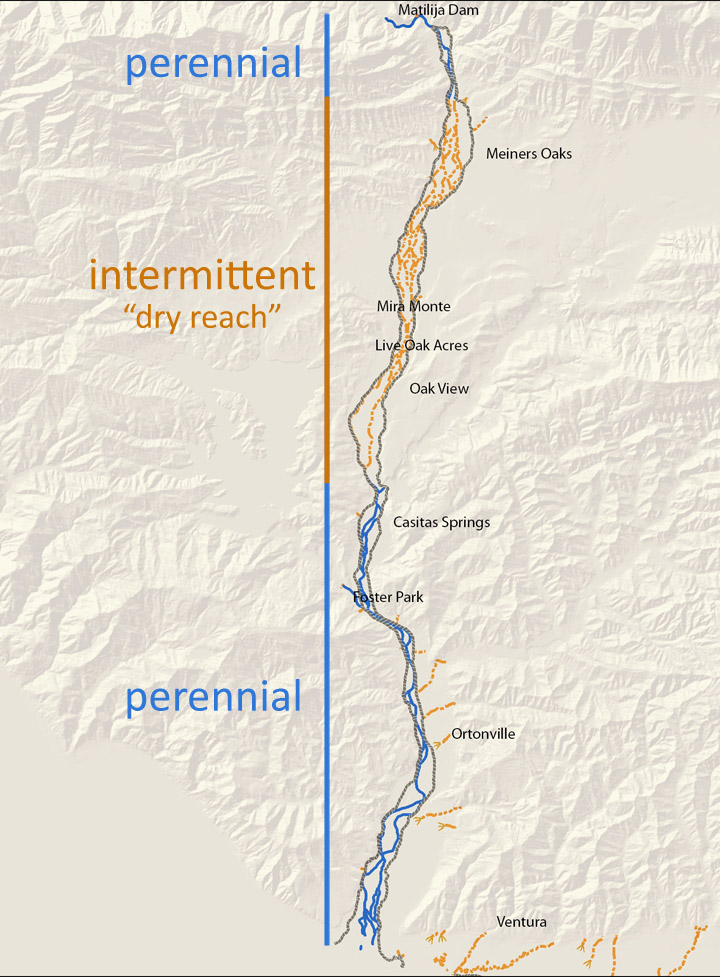 The Dry Reach. Much of the river bottom overlying the UVBR is known as the dry reach, where, in low to moderate rain­fall years, the surface water quickly disappears underground once storm flows have passed—even when the river is still flowing above and below this reach. The boundaries of the dry reach generally extend from somewhere below the Robles Diversion to just above the river’s confluence with San Antonio Creek (just below Oak View). Geographically, this dry reach is where boulders, cobbles, and sediments that have been eroded from the tallest mountains in the watershed are deposited as the gradient flattens and storm flows spread out. Water rapidly filters down through this coarse material to the groundwater basin below.

The Wet Reach. Because of the significant contributions of water from San Antonio Creek and naturally rising groundwater, the stretch of the Ventura River between the San Antonio Creek confluence and Foster Park is the wet reach. This reach typically flows year round except in multi-year dry periods.

In this area the shallow, the groundwater basin becomes narrower and shallower, forcing subsurface flow to the surface. This natural condition was enhanced by the Ventura County Power Company in 1906 through the construc­tion of a subsurface diversion structure to increase water retention in that area for extraction purposes. 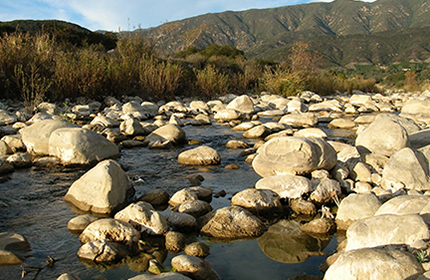 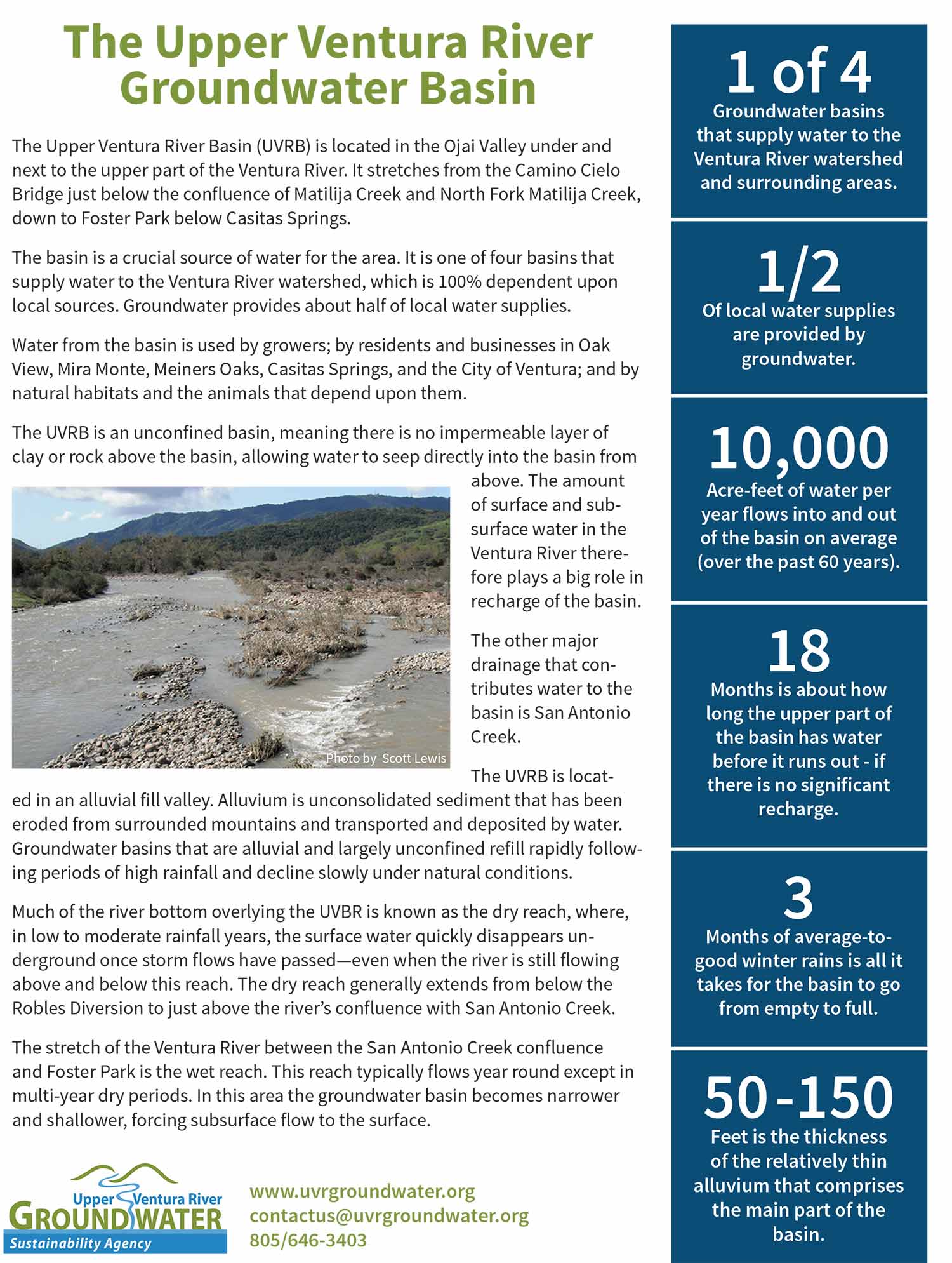 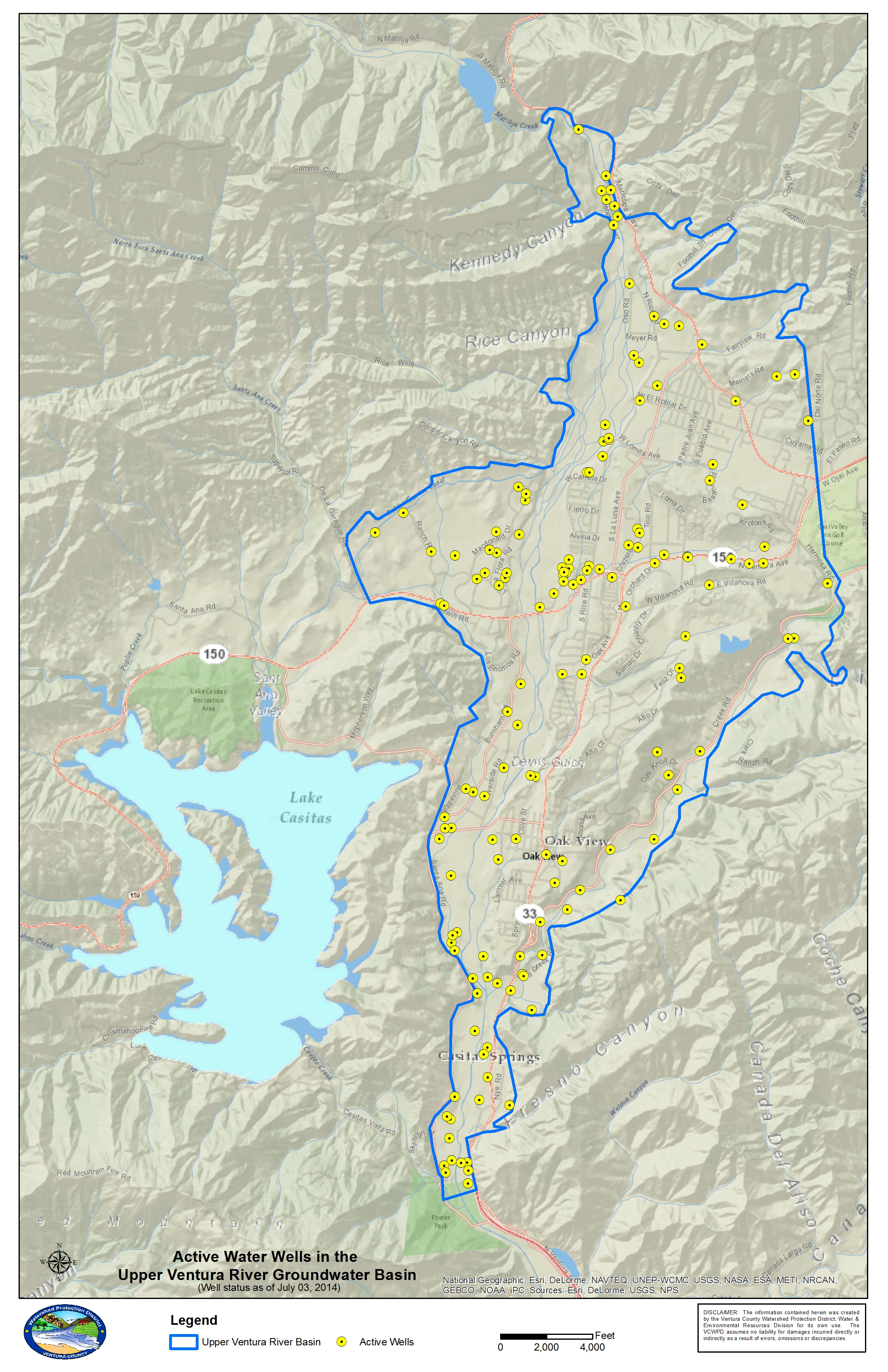 See the Ventura River Watershed Management Plan for more information on the basin. 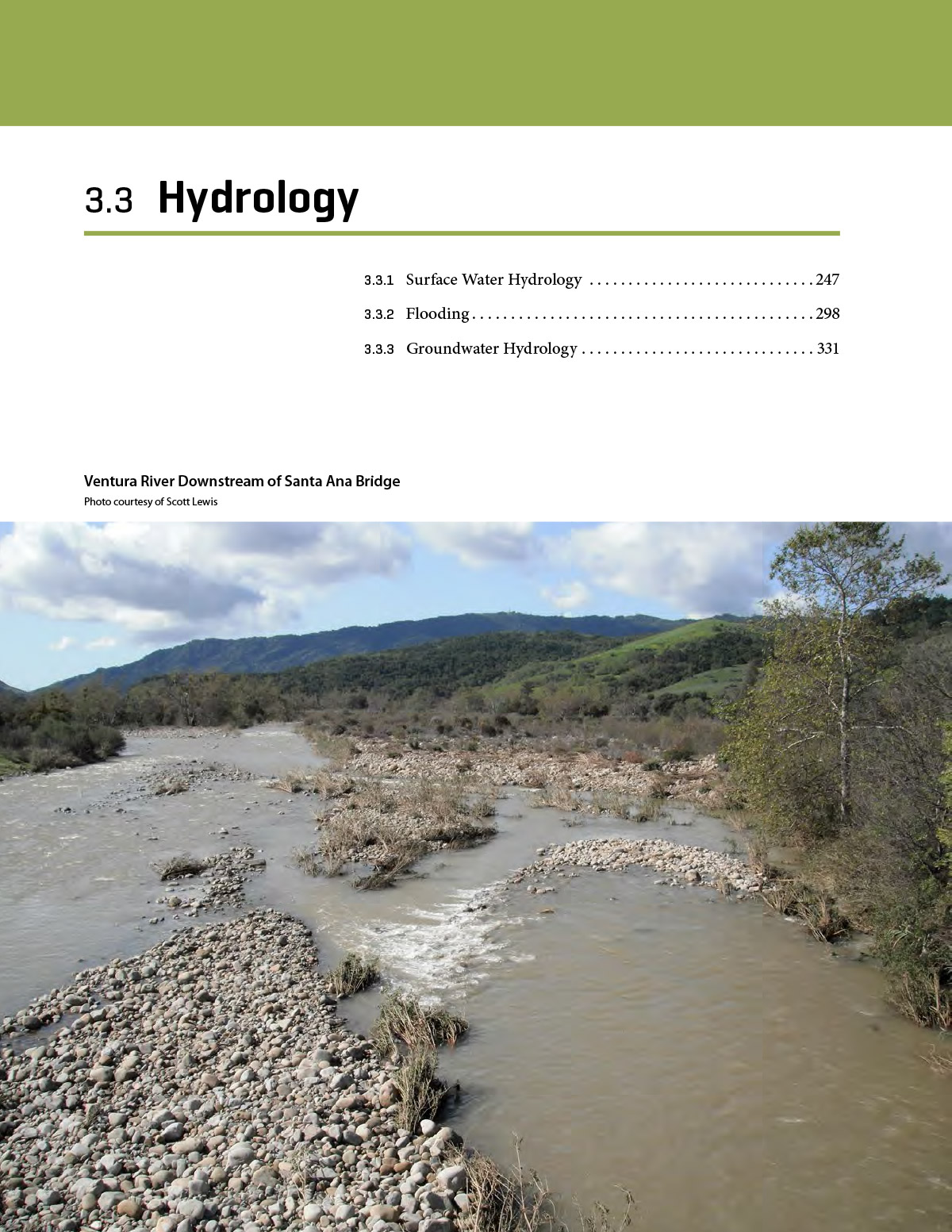