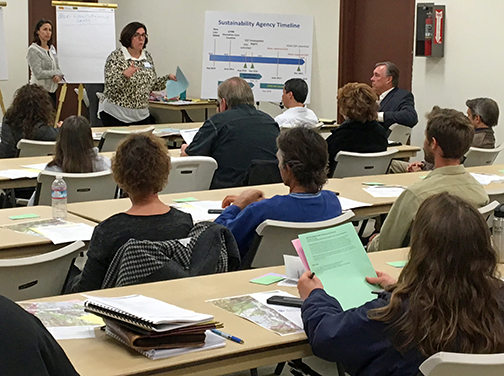 “The goal of the Formation Committee is to have the GSA established by August of 2016.”

If you have questions about SGMA or the formation of the Upper Ventura River GSA, contact:
Bert Rapp, Ventura River Water District
contactus@uvrgroundwater.org
805/646-3403

Why form a GSA now?

What is the current status of the Upper Ventura River GSA?

A GSA Formation Committee has been established and work is underway, but not complete. The committee is comprised of four water suppliers – Ventura River Water District, Meiners Oaks Water District, City of Ventura (Ventura Water), and Casitas Municipal Water District – and the County of Ventura. (See the Public Agencies page for more info.) A chronicle of the committee’s work thus far is available below.

The goal of the Formation Committee is to have the GSA established by August of 2016. Once the agency is in place, the next step will be development of the required groundwater sustainability plan for the basin.

How does the Formation Committee ensure that all voices are heard?

The Formation Committee’s aim is to be proactive and transparent in their process. They actively seek input from everyone who will be affected by the new GSA and its rules. Stakeholder meetings have been held and updates are regularly provided at other local meetings. This website – one of the first GSA websites in the state – is another attempt at communication and transparency. Most Formation Committee meetings are open to the public. (See the Public Meetings page for info.)

How does the Formation Committee develop a robust deliberation and decision-making process?

The Formation Committee is charged with creating a new regulatory agency. This agency’s basis of governance must be well-designed because its decisions must be accountable to its stakeholders, and also to the State’s sustainable groundwater management regulations. The committee is currently deliberating on these and other basic questions of structure:

Basis for Voting. Should members of the board of directors have equal weight on all issues, or do some issues warrant weighted voting? If weighted voting, what is basis for weighting (e.g., amount of water pumped, number of people served in the basin, something based on finances).

Board Size. The current Formation Committee preference is seven members, five public agency representatives plus one agricultural and one environmental representative.

Funding. How should revenues be raised?

A schedule showing when these topics will be discussed is available in the Work Plan.

What is the committee’s progress to date?

The Formation Committee’s progress toward establishing the GSA is summarized below.

October 8, 2014. The Ventura River Water District board agreed to take the initiative to establish a GSA Formation Committee.

April 23, 2015. At the first stakeholder meeting, committee representatives reported on their efforts to community members and gathered questions, concerns, and ideas.

May, 2015. A memorandum of understanding to share startup costs equally among the five agencies was approved by all participants. The committee also approved hiring an attorney to assist in writing a joint powers agreement for the GSA.

June, 2015. The committee asked the California Department of Water Resources (DWR) for the assistance of a professional facilitator to help with stakeholder outreach, strategic planning, and governance assessment.

August, 2015. DWR awarded funding to the Sacramento State University Center for Collaborative Policy to provide the facilitator. Work began in August 2015 and will end in July 2016.

November, 2015. The facilitator helped the committee develop a work plan for establishment of the GSA by August, 2016.

January 13, 2016. The Ventura River Water District board agreed to explore a scientific groundwater basin boundary modification. This issue is now being deliberated.

January 28, 2016. The committee held its second stakeholder meeting. Updates were provided, including the question of whether the basin boundary should be modified.

February, 2016. The Formation Committee launched this website to facilitate communication with stakeholders about the GSA formation process.